A user of the Snaplists app provided feedback recently that she would like to be able to control the sort order of the lists. Since 1.0, the lists have been sorted by last modifed descending, so any time a list is edited, it becomes the top-most list. I thought it was a good idea, so I added some new sort options to the app.

In version 2022.11, the user can now choose to sort the lists by last modified, name, or manual. The user can also drag and re-order the lists as desired (this is the “manual” sort order). 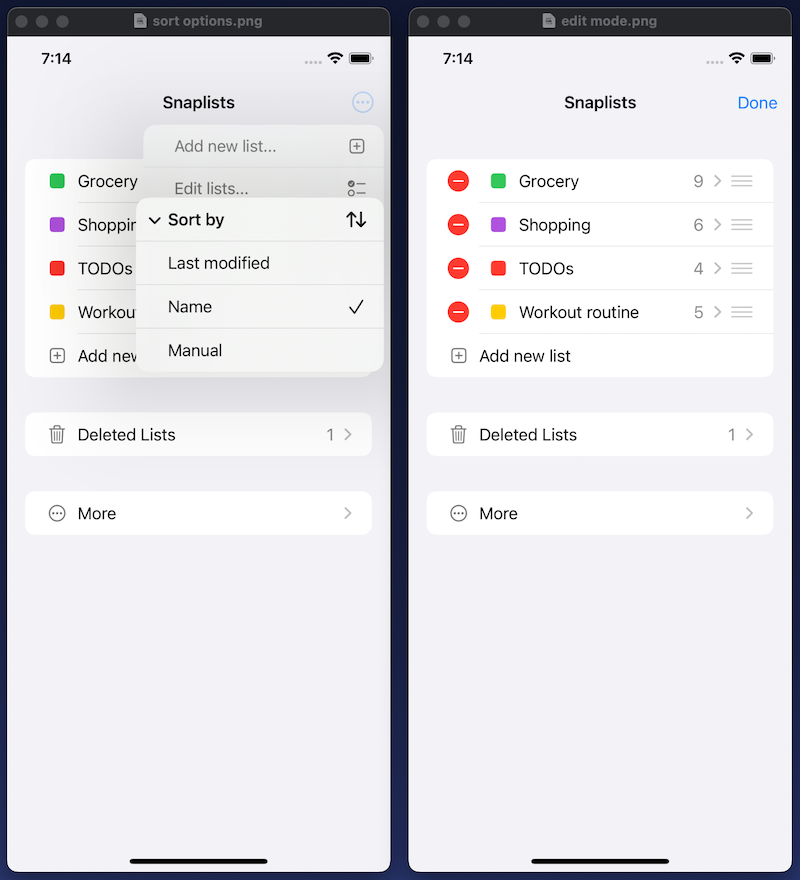 I wanted the new sort preference to sync automatically to the watchOS app (as well as any other devices), so the user sees their lists in the expected order there as well. But how to sync the setting to the watch? It would have been super simple if I could have used NSUbiquitousKeyValueStore but unfortunately, that is not available on watchOS. Well actually, it is available on watchOS 9, but I’m still supporting watchOS 8.

I decided to add another entity to the Core Data model to sync the sort preference across devices. I wanted to add something that might be useful in the future for other settings that might need to be synced, so I named the new entity AppSetting. It has an Integer 64 property for storing the setting value.

In my Swift code, I have an enum backed by Int64 and I’m storing the rawValue of the enum in the AppSetting entity when I save it to Core Data.

In the above code, SMPListsSortType.id is a static property that returns a hard-coded UUID, so there should only ever be one of these settings saved to the database. And in the getListsSortType method, if an entity is not found (because the user has never changed the sort order), then it defaults to sorting by last modified.

Also in this release, I added an option to toggle the automatic sorting of items on a list. Previously, as items were checked, they moved towards the bottom of the list automatically. Now the user can choose to toggle that behavior on/off.

And finally, I added a build configuration (.xcconfig) file to the Xcode project. I am using this to set the MARKETING_VERSION setting, so now I only need to set that in one place. Previously, I had to update the version on the iOS app, watchOS app, a framework, the widget extension, and an intents extension! That was five places I had to remember to bump the version when preparing a release. Now, I can just set it in the .xcconfig file 🙂

Version 2022.11 of Snaplists, with new list sorting options, is now available in the App Store.